PROJECT: Tell Me Why

Tell Me Why is an episodic narrative adventure game that follows twins Alyson and Tyler Ronan after a 10 year separation. As they reconnect, they use their special bond to unravel mysteries of their loving but troubled childhood. Set in Alaska, Tell Me Why features true-to-life characters, mature themes and gripping choices.

Here’s the videos of one of my levels.

DMC is a reboot of the Devil May Cry series. The player takes control of Dante, a demon hunter who has to take down Mundus, a demon who manipulates humanity through the comforts of life. Most of the game takes place in Limbo, a demonic dimension with an evolving environment that constantly tries to trap and kill Dante.

The game currently has a 86% rating on metacritic.

Here’s the videos of my levels.

This project was canceled. In this game, you play as werewolf and as human. The werewolf sections of the game were more focused on platforming and combat while the sections with the human form are more based on exploration, stealth and puzzle solving.

Published by Ubisoft for the launch of Kinect in 2010, Fighters Uncaged is the first fighting game released using this technology. The game gives the player the opportunity to fight against 12 differents opponents using his full body.

THE PROJECT: Boufbowl, The Game

Boufbowl is a turn based sport game based on the fictional sport, created by Ankama for the tv show Wakfu. The game is playable at this address http://www.gobbowl.com/en .

David Douillet Judo is a fighting game released for the PC and PS2 in 2006. The game combines classical elements from 3D fighting games such as Tekken and rythm games mechanics. 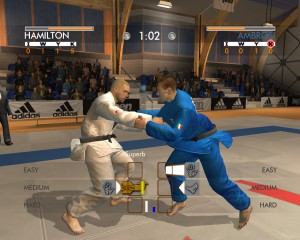